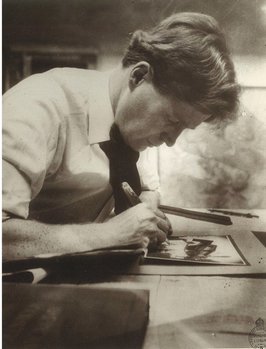 Lake Burley Griffin was conceived as the centrepiece of Walter Burley Griffin's plan for Australia's new capital city, Canberra. The American architect won the competition to design the city plan in 1912. It was considered innovative at the time because Griffin treated the planning of the city as landscape work, and Australia's largest single landscape project.

The history of Lake Burley Griffin follows that of the Australian Capital Territory (ACT). At Federation in 1901 the ACT was created in law to be the site of Canberra, although the question of the exact location remained open and was only finalised after extensive political maneuverings. In 1906, the state of New South Wales agreed to cede sufficient land for the capital on the condition it was located in the Yass-Canberra region.

In 1908 Government Surveyor, Charles Scrivener (1855-1923), was deployed to the area to scout suitable locations and map out a specific site. He decided on the current location in 1909, and one of the reasons was for its ability to store water "for ornamental purposes at reasonable cost".  In 1911, a design competition was launched to find a suitable plan for the new city. Scrivener's detailed survey of the area was supplied to the competing architects. As the Molonglo River flowed through the site, which was a flood plain, most of the proposals included artificial bodies of water.

Walter Burley Griffin (1876–1937) graduated from the University of Illinois as an architect and land planner in 1899. He worked in Frank Lloyd Wright's Oak Park studio from 1901 to 1906, where he met fellow architect Marion Mahony. In 1911 Marion and Walter established a joint architectural practice and were married. In May 1912, Walter was announced the winner of the 1911 Federal Capital City Design Competition and invited to Australia to oversee the construction of the nation's new capital. Copies of the original sketches and plans can be found here. Marion was responsible for the exquisite drawings visualizing the completed capital. The Griffins arrived in August 1913 and Walter was appointed Federal Capital Director of Design and Construction. Progress was painfully slow, however, marred by bureaucratic intervention. Some regarded Griffin's plan as too extravagant and impractical resulting in significant changes.

Griffin's proposal had an abundance of geometric patterns and incorporated concentric hexagonal and octagonal streets emanating from several radii. His lake design was at the heart of the city and consisted of a central basin in the shape of circular segment, a western and eastern basin, which were approximately circular, and a western and eastern lake, which were much larger and irregularly shaped, at either side of the system. The lakes were deliberately designed so that their orientation was related to various topographical landmarks in Canberra and connected by weirs. Later, Scrivener, as part of a government design committee, was responsible for modifying Griffin's winning design. He recommended changing the shape of the lake from Griffin's very geometric shapes to a much more organic one using a single dam, rather than Griffin's series of weirs. The lake would retain Griffin's three formal basins: east, central, and west, though in a more relaxed form. Over the years the plans were varied again, but the design of the lake remained largely based on the original committee's plan.

In 1916, a Royal Commission was held to investigate Griffin's performance as Director and the progress of the design implementation. By the time Griffin left Canberra in 1920 his efforts had been undermined, his government position abolished, and very little work had been done on the new capital. Development would continue to be slow over the coming decades. That was hardly surprising, since after World War 1 the onset of the Great Depression and World War 2 combined with a number of political disputes and more modifications to impact on the allocation of resources to the project.

Nevertheless by the 1950's, Prime Minister Robert Menzies regarded the state of the new capital as an embarrassment and began to champion its development. In 1958 the newly formed National Capital Development Commission (NCDC) was given more power by Menzies and things really got moving. Construction on Scrivener Dam was authorised in 1959 and began in September 1960. The excavation of lake also began in 1960 with the clearing of vegetation from the Molonglo floodplain, the removal of trees from the golf course as well as various sports grounds and houses. The construction of the two bridges over the lake began in 1960 (Kings) and 1961 (Commonwealth). They were designed with enough height to allow sailing craft with tall masts to pass under them when the lake reached its desired level.

Scrivener Dam was completed in 1963 during a period of prolonged drought. When its valves were closed on 20 September 1963 it took a further eight months for the lake to fill. After the drought broke and there were several days of heavy rain it finally reached its planned level on 29 April 1964.  On 17 October 1964, Prime Minister Menzies commemorated the filling of the lake and the completion of stage one with an opening ceremony amid the backdrop of sailing craft and a fireworks display. You can listen to Menzies' address here, as part of the National Library of Australia's oral history recordings. It was Menzies who insisted that the lake be named "Lake Burley Griffin". After five decades, at the cost of AUD5,039,050, Burley Griffin's plan had been realised. There is a wealth of comprehensive material on the development of Canberra and Lake Burley Griffin and a few references are provided on the links page which provide interesting reading.